In the early hours of October 22, last year, Katmai vessel went missing. The 92 feet long boat for catching cod fish sailed with 11 crew members. The boat belonged to the Katmai Fisheries, based in Seattle, Washington. On October 22, APRN (Alska Public Radio Network) reported that the vessel was missing in the Bering Sea. The sea lies in the Pacific Ocean, bordered by Alaska, Siberia and Kamchatka Peninsula. 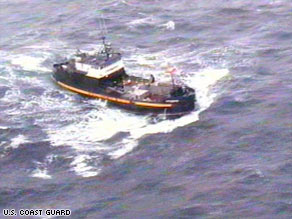 APRN reported that the vessel went missing in the Amchitka pass and that Coast received no mayday calls except EPIRB signals at about 1.00am. A C-130 plan and a Jayhawk helicopter went searching for the missing vessel. six hours later. After 6 more hours they reepoted of having found a part of the raft and a body wearing survival suit. Tow rafts were dropped and four members from the crew were rescued.

Imagine a place, all deserted with water temperature about 3 degree celsius and waves travelling at the speed of 34 miles per hour. We have an intersting point in question, the safety of the crew members, of the people who work for Katmai fisheries and similar companies, the obliterated facts and cursory inspections.

The unfortunate event of Katmai vessel is not the only one that ever happened. Every year many people have to put on the fight with the fierce sea, with little safety measures and obsolete equipments. It is not just the headache of the Coast Guard as many lives, many families depend on it. Should these poor people be ignored and left to die, battling with sea storms. No.  So what is the state going to do about it? Nothing, I guess. Who’s going to bring the sad news to their families, look after them? No idea.

May be the Discovery’s  Deadliest Catch gives us some insights of the life on the boat and its crew members. The irony is that people better understand when they see it live. Tell them the story and it has little effect.

Despite the developed infrastructure and faculties to minimise such accidents, there has been no serious effort made by any institution so far. The best they do is send a team on inspection and sometimes rely on the reports send by the company experts themselves. That is totally unfair. If the state government can’t do anything about it, we implore the non-government organisations to look into the matter and probe such disasters.

This entry was posted on Wednesday, April 22nd, 2009 at 6:53 am and is filed under Dangerous, News. You can follow any responses to this entry through the RSS 2.0 feed. You can leave a response, or trackback from your own site.